Shining bright is a series of paintings exploring the essence of popculture and aspects significant to modern times, accentuating the phenomenon of the future. The title itself refers to a famous song Diamonds, performed by Rihanna – one of the biggest pop stars nowadays. The reoccuring theme of the series is a shining material – gold and silver foils, tinware, crystals; everything you can find in cheap shops, store chains and popular videoclips. An inexpensive fabric, but at least it is nice and shiny. It diverts attention away from all the unwanted imperfections and all possible defects. The paintings, which are seemingly trivial and superficial, carry non-essentialism that reveals […] how unsuccessful was the traditional and globalising tendency of aesthetics […] and they gain a specific meaning in the context of modern popculture. The figurative scenes are entwined with images showing deformed objects of no practical use, devoid of worth and suggesting false show, aesthetically elevated to the status of artwork. In the painting Exploration of Ms Tulp, in reference to Rembrandt’s artwork, The Anatomy Lesson of Dr Tulp, the position of a doctor is taken by a woman studying the anatomy of contemporaneity, where a human body has been idealized to the level of ridicule. The silver man becomes a symbol of the perfect human – the protagonist of the computer game , the avatar on social media. Gender roles are only seemingly reversed. The silver man seems to be objectified, but as we face changing times, human nature stays the same: the protagonist of the painting as an ideal of masculinity, desires Ms Tulp – he wants to possess and enslave her, while Ms Tulp, being a “typical” woman, will not protest against it. There is a strong antagonism of nature versus nurture. As a self-portrait painter, I am placing myself at the very heart of a social dilemma concering the division of gender roles in the context of atavistic needs. The silver man symbolises an eternal dialogue between the past, the present and the future; he is Greek ideal of an ancient beauty and at the same time, an avatar of future where there is no space and/or time for body contact, and the body itself is a humbug, unreal creation: a baroque emblem of vanitas. A gold Celtic shield, a sign of eternity, becomes an alternative atribute in the context of the urge to stay forever young and beautiful. Just like a court jester disguised as prohpetical bard, I am fortelling a shining and fast-fading future, as I wink at my audience. Irony and distance are the easiest forms of human communication in the modern times, while indifference becomes a leading attitude, in which I find myself perfectly. 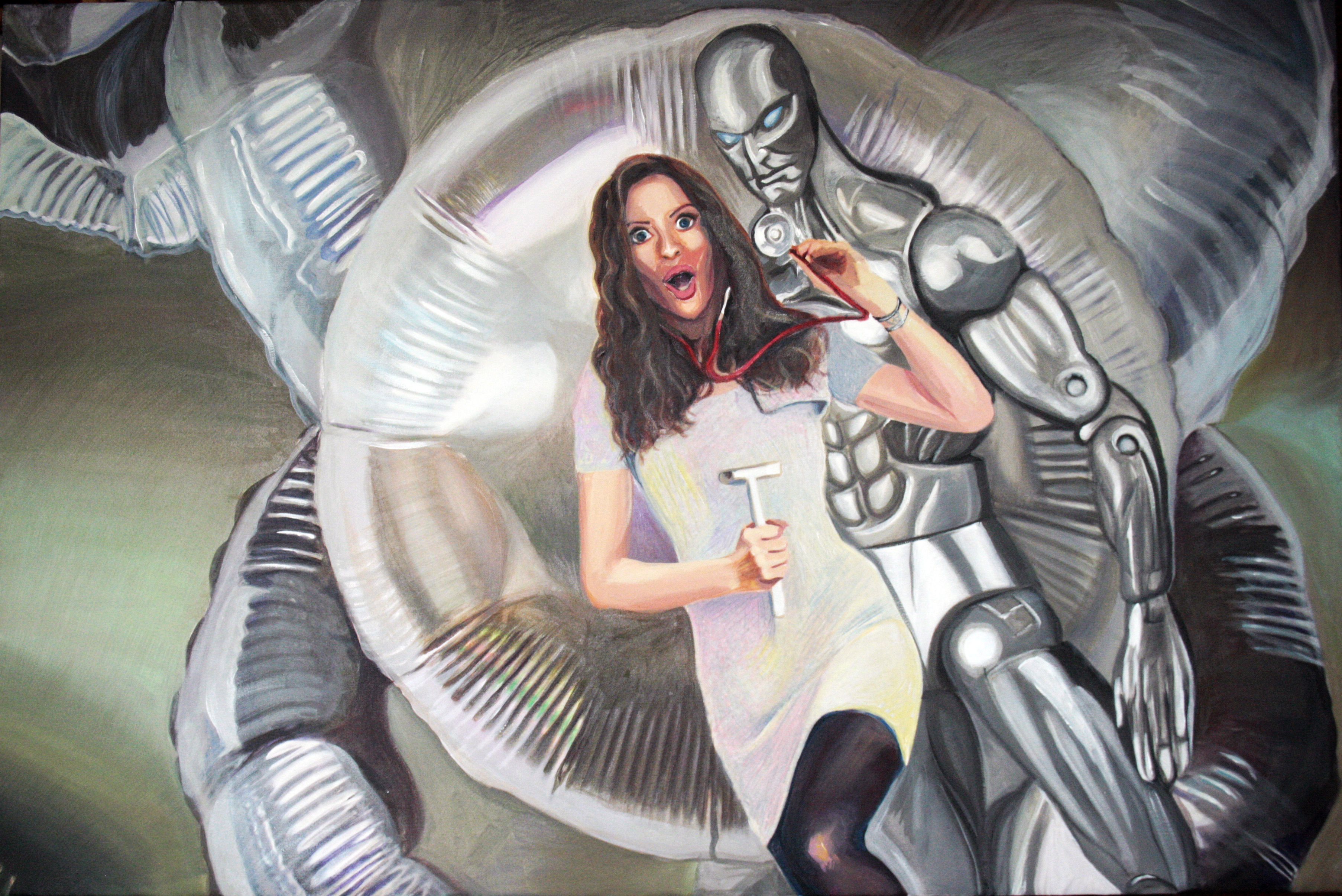